More retouching for The Times

One of the (few) improved skills I have acquired since spreading my wings out of newspaper photography has been using digital imaging. Every image a professional shoots requires this to some extent. Often it is just the mundane necessity of taking a RAW file and making it press-ready by altering colour density, sharpness etc. Most professionals shoot in RAW most of the time to retain maximum information in the digital file and to stop the camera making decisions on colours etc. For us, such algorithms programmed by the manufacturer take too much control from us pro’s who tend to be control freaks at the best of times. Briefly, if your camera is set on JPEG mode (and if it is a compact camera this may even be its only mode) then every exposure is being messed with by the camera’s chip and vital information is deleted when it is written to the memory card in order for more images to be stored. If you have an iPod you can liken shooting RAW to importing your music using Apple Lossless and JPEG to MP3. I know which sounds and looks better but then I’m prepared to sacrifice a bit of sonic palate for the convenience of thousands of songs fitting on my device. (Apologies to my brother in law Dave Blackman at Hiltongrove Mastering who has the ears of a long-eared bat. Not visually Dave. You can confirm this by visiting http://www.hiltongrovemastering.com).

Apart from all that RAW conversion stuff many files benefit from some extra tweaking. Not wholesale manipulation such as transplanting heads (though I have done that in wedding groups as a last resort) but what old gits like me know as “darkroom technique”. Printing by hand meant we could shoot on film in a certain way knowing how we might subtly change the image in the darkroom later. By deploying shadow puppetry (really) under the beam of a projected image onto photo paper we altered the dark and light areas by restricting or adding the amount of light hitting the paper. It’s known as “dodging” and “burning”. These tools are digitally in the Photoshop toolbox. They have even kept the names. Here is an example of such tweakage. This lovely portrait of Theo Walcott is by Marc Aspland, Staff Sport Photographer at The Times. Marc knew exactly what he wanted when shooting it. He placed a black cloth behind Theo and used the directional window light from the left but it could just as easily been a studio light with softbox. Marc shot most of the shots tight but stepped back to include the cloth on some and sent me his files as a fresh pair of eyes. When working for national papers we usually don’t have the time to do much of this stuff because of short deadlines. Hence all the food, wedding and portrait work I do has given me more time to explore digital imaging than previously. Using dodge and burn tools and by tweaking contrast and saturation I came up with this. Knowing when to stop is important and I could easily have retouched his scratched leather soles but I love the contrast with the red. I included a film style border for the full analogue look (something else I developed from studio portrait work though we all used it originally in the darkroom when hand-printing) and The Times gave it an almost full page. Walcott sent Marc a text thanking him for the lovely image. 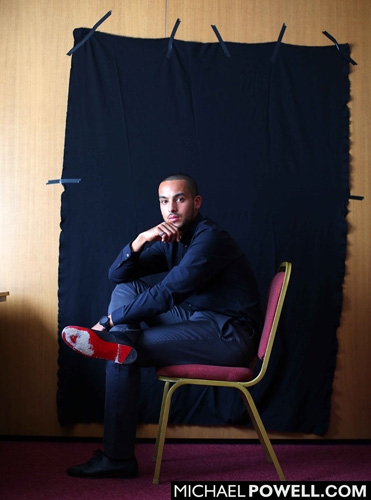