The Michael Powell photography exhibition ‘Music For Life’ is coming soon to the Caistor Arts & Heritage Centre. I will be hanging the pictures this week and the whole exhibition will be on show until the end of August. More information on my project to come. You can visit the centre here: http://28ploughhill.co.uk 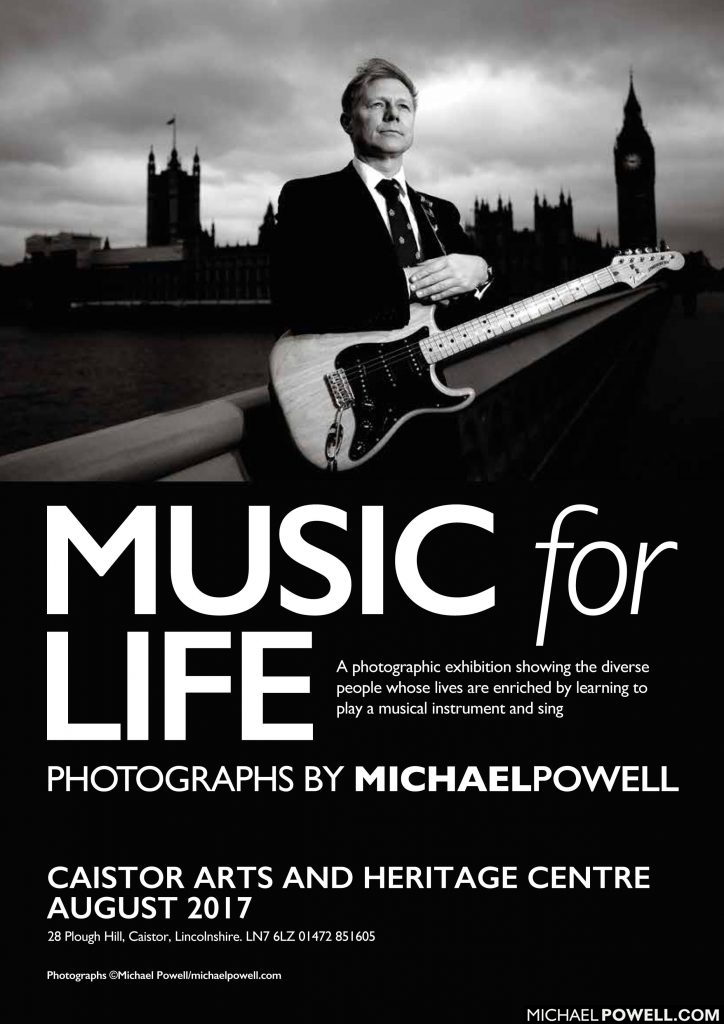 Here are my portraits of Australia fast bowler James Pattinson as published in The Sunday Times. James is uniquely positioned to give the England team a headache should he picked for the forthcoming Ashes tour as he is currently playing for Nottinghamshire County Cricket Club gaining an insight into England’s top cricketers. He already has 36 Australia team caps. Despite enjoying life in Nottingham, James is still not completely assimilated into English life, however. Dodging lawnmowers and posing for me out on the Trent Bridge pitch in a cloudy but pleasant 15 degrees I could tell he was getting cold so we finished off with a few shots back at the historic pavilion. The portraits are of past Nottinghamshire County Cricket Club presidents. For the rest of the shots visit Camera Press. 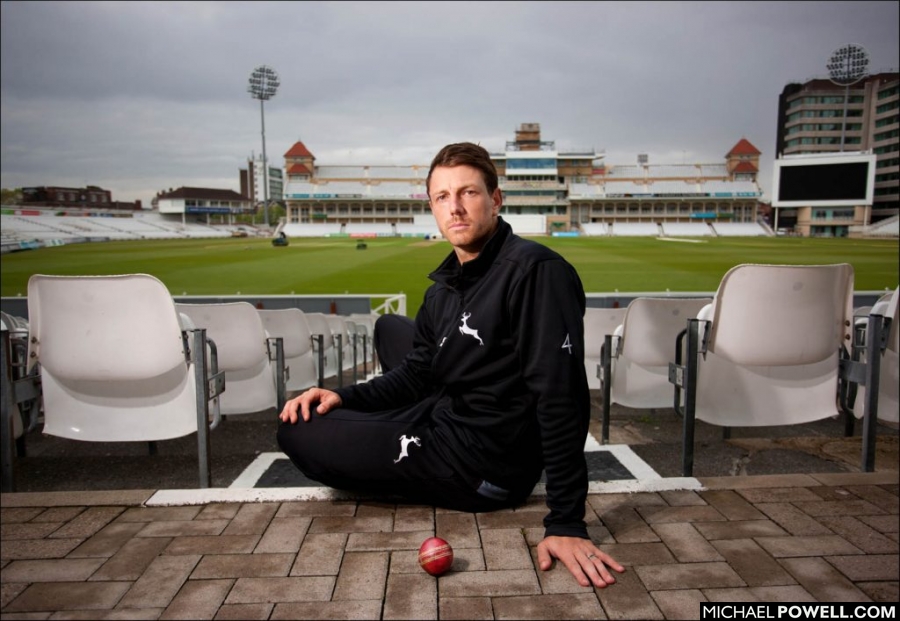 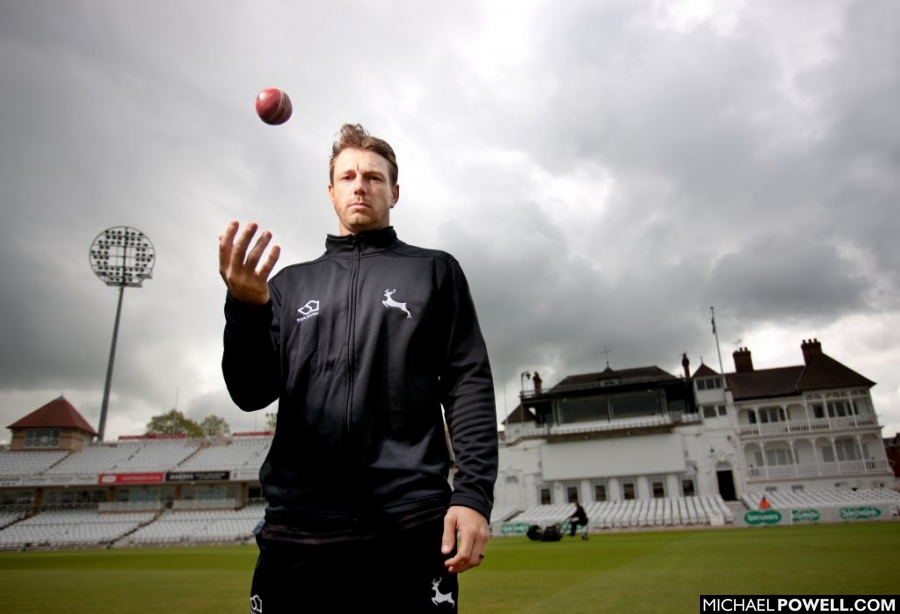 Lincoln City FC’s amazing FA Cup run which culminated in a quarter final match against Arsenal at the stunning Emirates Stadium captured imaginations around the world. The non-league side beat Guisley, Altrincham, Oldham, Ipswich, Brighton and Premier League side Burnley to become the first non-league team in 103 years to reach the quarter finals. The team, the managers Danny & Nicky Cowley and the city were suddenly all over the national newspapers and the Burnley result was even in lights in New York’s Times Square. I spent quite a bit of time working on the story myself.

I have been involved in The Times ‘My sporting body’ series from the start having shot some of the athletes and having done the post production work on every sportsperson featured. For the Saturday match day edition against Arsenal I managed to find a Lincoln City player willing to strip naked and be photographed jumping for headers. Striker, Jack Muldoon volunteered. While my assistant (and wife), Sarah hid red-faced in another room, unabashed writer, John Westerby tirelessly fed Jack with a FA Cup 2017 ball. Jack was brilliant. He kicked, headed and performed tricks again and again. Jack is very unusual in professional football by having Type 1 diabetes. He even manages his blood sugar to fit-in with match kick-off times. A real inspiration, here he is as published in The Times.

Straight after photographing Jack was a very rapid portrait shoot with Lincoln City manager Danny Cowley and assistant, Nicky his brother. The media workload suddenly thrust on the managers was huge and despite an over-running TV interview at Sincil Bank and another one to do in London at a West Ham game just a few hours later they still gave me time. My studio equipment from the Jack Muldoon shoot was still set up so I used it for their portraits. They actually ran from the last shot straight to their car to drive to the capital. This shot is a slight nod to David Bailey’s iconic portrait of the Kray twins but I didn’t have time to change the background lighting to high-key. The one published in The Times was a bit more light-hearted. Two of the nicest guys I’ve met in football.

And now to Matt Alexander. Matt has a lifelong involvement with football as fan, player, agent, scout and executive with Notts County Ladies Football Club. Writer and ex-player Gregor Robertson interviewed Matt for his ‘Journeyman’ series. We met Matt at Lincoln City where his father, Keith is a legendary figure and frequently acknowledged by the Cowley brothers. Keith Alexander had two spells as manager of Lincoln City taking the team into four play-offs. He was the first black qualified referee in England and the Football League’s first full-time professional manager. He also played in the league and internationally for St. Lucia. I had the pleasure of photographing Keith at Sincil Bank for The Times back in 2004 on his return to Lincoln following a brain aneurysm. My idea was to locate the old archive shot and photograph his son Matt at the same spot. Shame the Lincoln Imp gates have been removed. The shots were used together in The Times.

To another Matt. Lincoln City striker Matt Rhead is a towering figure at the club. At 6ft 4 he’s a formidable presence on the pitch. At the Burnley match his physical game produced much tussling with Joey Barton whom some fans accused of trying to get Matt Rhead sent off. For another Times interview I photographed him with ex Chelsea and Ireland player Tony Cascarino. Tony is a regular writer for The Times Sport and found he had much in common with Matt. At 6ft 3 Tony was similarly talented in the air on the end of a long ball. Tony to Matt: “Are you sleeping OK?”. Matt to Tony: “I’ve got two kids so I haven’t slept for years!”. Matt on playing football for a living: “What’s not to love? It’s not a job, it’s a hobby. I’m getting paid. Ridiculous”. I took various shots of them around historic uptown Lincoln and chatting in the Wig & Mitre on Steep Hill. Here they are outside Lincoln Cathedral (lit by some serious off-camera flash).

And so to the Emirates stadium. I spotted this cheeky decoration of the Lincoln Imp on Holloway Road just before the match.

And finally, here’s my view of the match. Pity about the result but what a magnificent journey by Lincoln City.

Here’s the first in a regular series of recipe blogs from Green and Powell food photography & recipe development, a superb Breakfast Brioche Bread and Pecan Pudding with Maple Syrup. Chef, Rachel Green and I have produced and photographed over 1000 recipes together over the last ten years and published two recipe books. Much of our work is for food producers and growers who need unique content for PR, packaging and websites. Rachel develops recipes using the producer’s ingredients (in this case eggs) then she cooks and I photograph. Many of the shots end up published in national magazines such as Hello! Here is one such recipe. This was featured last month in Hello! as part of a four page spread on egg recipes (see the blog below for the tear sheet). Scroll down for the recipe with method. This one’s a stunner. As ever, I should know because once the pictures were in the can, I ate it! (Well, most of it. Thought I’d better leave some for others). For more on our work click here.

In a bowl whisk together the whole eggs, egg yolks, castor sugar, vanilla extract, cinnamon, nutmeg and a pinch of salt.  Whisk until the mixture is blended but not frothy.

Cut the brioche slices in half and arrange in a well-buttered rectangular baking dish, overlapping the slices. Pour the egg mixture over the bread slices; making sure it is all covered evenly.  Cover and refrigerate overnight if possible.

The next day, top with pecans.  Warm together all the remaining ingredients until the butter has just melted.  Remove from the heat and cool slightly, then pour over the French toast.

Bake in the oven for 40 minutes until puffed and lightly golden in colour, if the top of the pudding starts to go to brown, cover with foil.

Hello! magazine has featured another spread of work by Green and Powell food photography and recipe development. Five of Rachel Green’s recipes featuring eggs photographed by me are featured in the spread in the Hello! lifestyle section. They are all brilliant. I know because I tried each one when I’d finished doing the food photography. A particular favourite of mine is the Breakfast brioche and pecan pudding with maple syrup. I’ll be posting the photograph with recipe soon which will become a regular feature here on the blog featuring Green and Powell work. For more go here.