See a York wedding photographer shoot a ceremony in time-lapse in this short video by Michael Powell.

Here’s something a little different. I have always prided myself on not being a slow photographer, particularly at weddings but here’s an entire wedding ceremony presented in just one and a half minutes. I have done these time-lapse weddings a number of times over the years but there’s rarely a really good place to mount a camera. This wonderful church that hosted Roz & Michael’s wedding had a balcony view where I clamped the camera to a flexible tripod on the back of a chair. The camera was then secured again by a lanyard just in case it became loose or was knocked. This also keeps my mind at rest when I’m working at the other end of the church. On this video you can see me at the top left working from behind a column near the altar. I have included a slower version at the bottom of the page for the benefit of guests who may be able to pick themselves out a bit more easily.

The music here is by Brendan Perkins, the talented bassist in our rock group, The Zimmer Band.

See more by York wedding photographer Michael Powell in the galleries at michaelpowell.com

Brussels sprout recipe by Rachel Green here with. If you still can’t get enough sprouts after a Christmas sprout extravaganza then take a look at this superb recipe styled by Rachel with food photography by Michael Powell (me). Here Rachel created Brussels sprout and Pancetta kebabs with honey mustard dip. I’ll be posting more of these recipe cards by Elsoms in the coming weeks. As ever I can vouch for this dish as I ate most of it after we had the shots in the can. If you would like a higher quality pdf version of this Brussels sprout recipe send me an email from the contact link at the top of the page or from here. 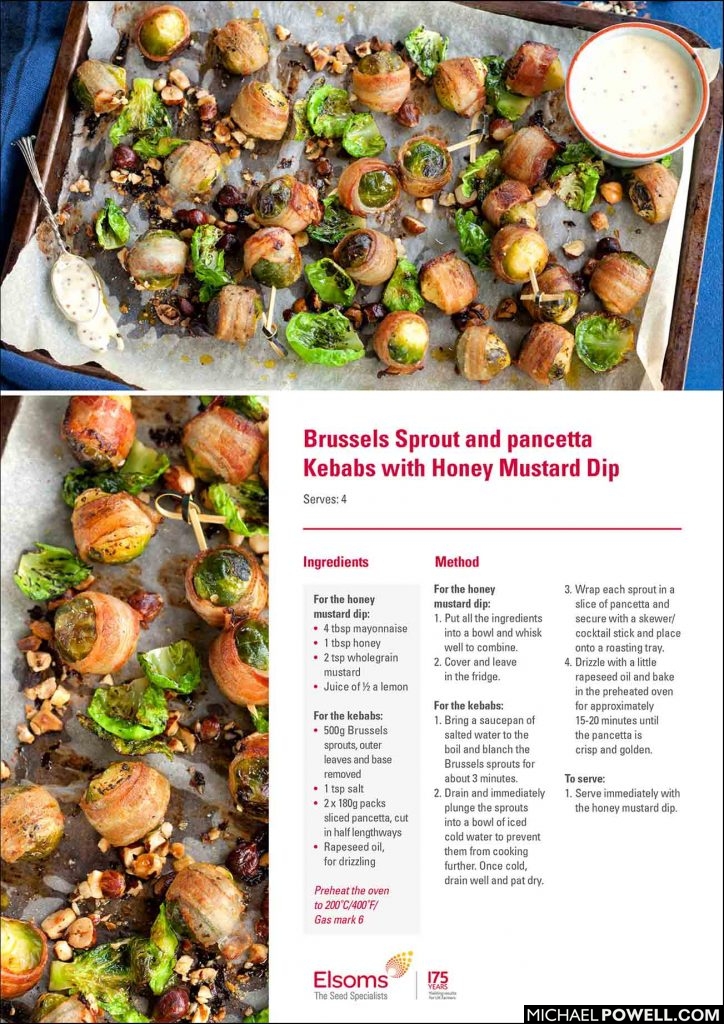 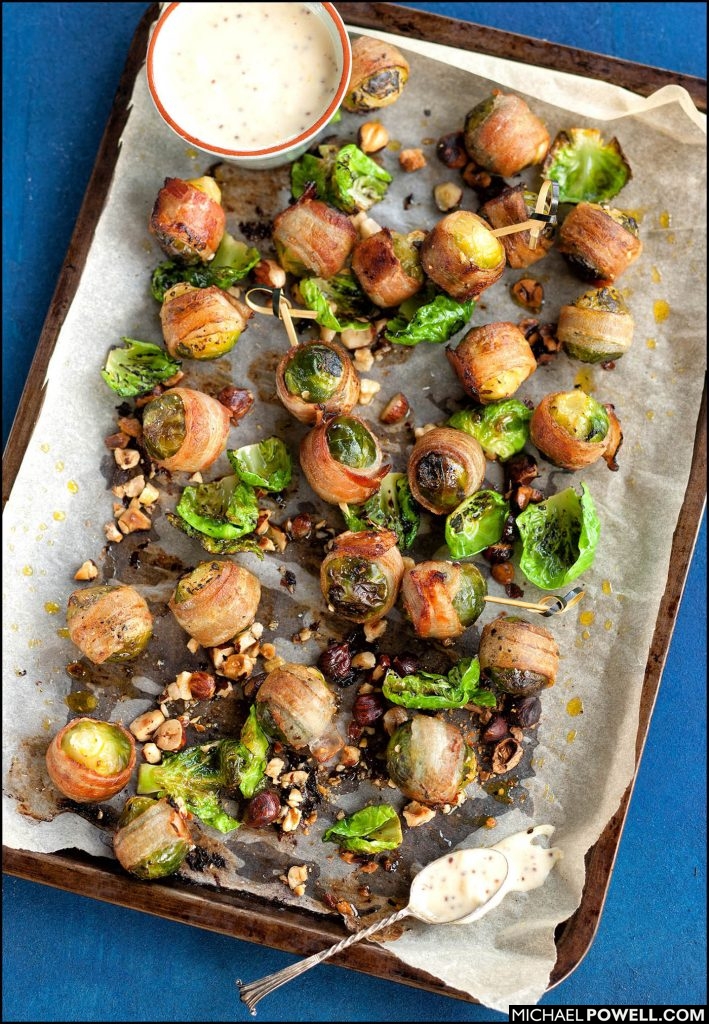 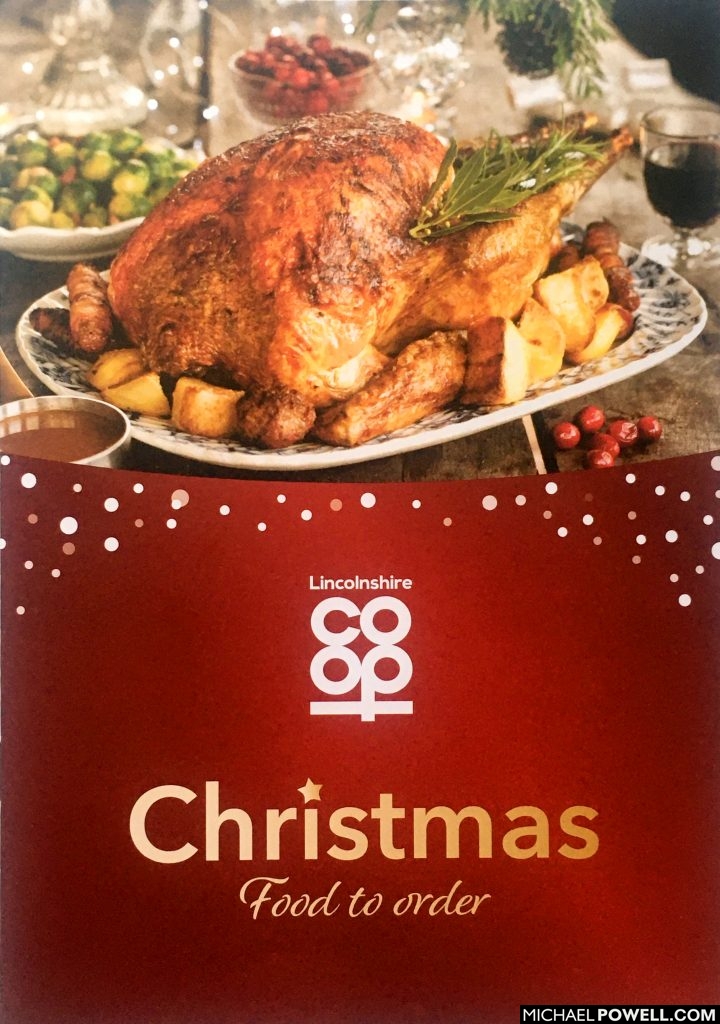 Co-op Christmas food to order brochure now available with cover imagery by Michael Powell and food styling by Rachel Green. Visitors to Lincolnshire Co-op stores will see point of sale displays and brochures featuring my pictures of a Christmas turkey lunch and an Uncle Henry’s ham. Orders can be collected and paid for in store on 21st, 22nd and 23rd December.

Christmas themed food photography is such a frequent commission for Rachel and I that my box of Christmas decorations and props is always stored closest to the loft hatch so I don’t have to root around looking for it. We shot this Christmas food just a few weeks ago but we have photographed fully decorated trees and roasted turkeys in front of log fires on hot summer days on many occasions. Sharp eyed oenophiles may recognise the distinctively shaped bottle of Miraval Rose. The winery is co-owned by Hollywood actors Brad Pitt and Angelina Jolie and very nice it is too.

The locally sourced turkey here is locally sourced and the Uncle Henry’s Honey Glazed Ham is from their own Hampshire breed pigs reared at Grayingham in Lincolnshire. They are fed on cereal crops also grown there. Meat is prepared on site and smoked and cured in the traditional way.

Farewell Clive James who died on 24th November 2019 at the age of 80. I spent a very enjoyable hour or so photographing him for The Times in the mid 1990s. I shot maybe three or four rolls* of him as he chatted and afterwards during some one-to-one time. For somebody who had spent so much of his life in front of a camera he seemed genuinely nervous in front of mine. I hope that wasn’t a reflection on me as I consider myself quite discreet and sensitive when photographing people. Maybe it was the lack of control as most of his TV appearances were his own work, wonderful travel series, documentaries and hilarious late night chat shows. (Check out the regular TV appearances with Peter Cook). Anyway, he soon relaxed and a stream of funny stories, recollections and observations flowed (which I wish I could repeat here). One thing I remember was that when setting up my distinctly low-tech lighting (a single Metz CT-45 flashgun connected by a 15 foot sync cable and translucent brolly) I said “This is as high-tech as it gets”. He replied with “But I’m a low-tech guy”.

I’ll locate the rest of the Clive James shoot sometime for another blog post but for now this is the one shot I can find. The Times printed a more thoughtful tight portrait of him looking down the lens, a style I regret getting a bit too keen on back then. I’ve noticed that all my portrait shots from recent years are much looser and certainly better lit, though you can’t knock that old Metz! Clive James appears in my website gallery of portraits. Check out portraits old and new here.

*rolls of photographic film for those too young to know. Look it up, it’s amazing. Think of it as the visual version of vinyl**

***mp3 – think of it as the digital version of compact cassette****

****cassette – think of it as the audio version of photographic film.

Glad that’s all cleared up.

Lincoln City manager Michael Appleton was interviewed by Henry Winter in The Times yesterday in a fascinating piece that covered Appleton’s playing career, a devastating injury, subsequent legal action and move into coaching and football management. Just prior to the interview we strolled the streets around Lincoln Cathedral during which I shot some atmospheric portraits utilising multiple flash set ups and the dying autumn daylight. The cathedral itself is currently being renovated at its west side and is covered by scaffolding so I used the stone arches at Exchequer Gate as my location.

Michael Appleton started his playing career at Manchester Utd with spells at Wimbledon, Lincoln City, Grimsby Town, Preston North End and West Bromwich Albion. It was whilst playing for West Bromwich he sustained a knee injury in training that cut short his playing career. His surgeon decided to operate. The decision was ruled damaging and incorrect in court and Appleton received a £1.5 million settlement. He still feels the pain in his knee daily.

Michael Appleton recently took over as Lincoln City manager when Danny Cowley and brother Nicky accepted an offer to manage struggling Huddersfield Town. The former PE teachers oversaw a double promotion, a quarter final FA Cup tie against Arsenal whilst still a non-league team and victory in the 2017-18 EFL Trophy final at Wembley. However, after an excellent start to the new season in League 1 under the Cowleys the team lost five of their seven last games with Danny and Nicky. After a brief caretaker management spell during which Lincoln were defeated at home 6-0 to Oxford Utd, Michael Appleton was appointed new manager. Ironically, he was manager of Oxford Utd when they secured promotion to League One just a few years ago and was in the stand to watch his old side thrash his new side just a few days before his tenure started. His interim job was as caretaker at Leicester City. (See previous blogs on Leicester City players Harry Maguire and Shinzi Okazaki. An Andy King post will follow).

I am a regular down at Sincil Bank as a Lincoln City fan and have enjoyed meeting and photographing quite a few of the players and managers over the years. A post will follow soon on those encounters and include the portraits I shot.